The firm of Kneisler & Schondel has been servicing the needs of hard working individuals like yourself since 1995.

Our team of experts in the areas of workers’ compensation and Social Security Disability benefits bring their years of experience to each and every case to deliver the highest results in the shortest amount of time possible. Mr. Schondel was born and raised in San Diego. He graduated from California State University Sacramento in 1985, and spent the next seven years working as a police officer with the San Diego Police Department. While working “around-the-clock” as a police officer, Mr. Schondel attended law school at Western State University College of Law (aka: Thomas Jefferson School of Law).  He married his wife Sandy in 1990, and the two of them completed law school together in 1991. They then relocated to Sonoma County where Mr. Schondel took a job with a local firm representing injured workers. After a couple of years with that firm, he decided to venture out to practice law on his own, and partnered with Jim Kneisler, Jr. Although Mr. Kneisler and Mr. Schondel have had a variety of law partners over the years, they were the original founding partners of Kneisler & Schondel. Mr. Schondel has been representing injured workers, and been a member of the California Applicant’s Attorneys Association (CAAA) since 1993. He has been a certified specialist in workers compensation law (California Board of Legal Specialization of the State Bar of California) since 1998. He is a member of the National Organization of Social Security Claimants’ Representatives (NOSSCR), and has handled nearly 400 social security hearings.

Matthew A Schondel, Esq., is a Certified Specialist in Workers’ Compensation by “the State Bar of California Board of Legal Specialization.

He and his wife are the proud parents of two beautiful teenage daughters who will be heading off to college in no time. Mr. Schondel dabbles with rhythm guitar and enjoys jamming with friends. He is an avid runner, downhill skier, and football fan.

Please note: James R. Kneisler Jr. has retired from the firm.  Matthew A. Schondel is the sole owner and proprietor dba: Kneisler & Schondel. Grisel has been with Kneisler & Schondel since 2003.  As the Office Manager & Legal Assistant, she handles various tasks in the office such as case management, spending time with new and existing clients, specifically Spanish speaking clients and helps run the office. Learn More 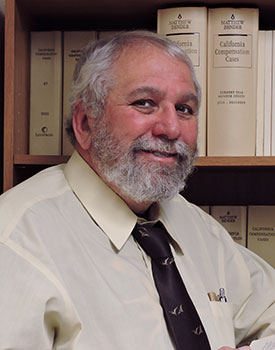 Teresa has been with Kneisler & Schondel since 2007.  As the receptionist at Kneisler & Schondel, she specializes in front office assistance and she is responsible for welcoming clients, answering phone calls, and support tasks.  Learn More

Now that you know more about our team members please follow one of these links to learn more about what we do and how we can help you: